You're Reading...
In other news

Does your food have a face? 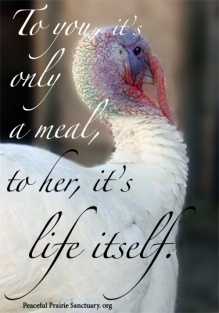 I am a vegetarian for the most part, not because I don’t like meat but because of an epiphany of sorts.

One day we had a particularly bad fight between my 2 English Bulldogs & I was putting neosporin on scratches & kissing boo boo’s & I told my babies that was not nice, & that we don’t eat our friends:

I was pulling a chicken out of the freezer. I don’t know what happened but a wave of grief washed over me & I thought about what life must’ve been like for that creature before it landed in my grocery cart. That evening someone emailed me a video about slaughterhouse cruelty. I actually watched it… Never again.

All of a sudden everything in my freezer, & most everything in the fridge HAD A FACE. Familiar faces of time spent at my great grandparents farm, the face of my little pet pig who was the runt of the litter, the warm noses of the dairy cows who would blow there hot breath on me while I tried to milk them on cold Michigan mornings. The snorting laughs of the pigs who would follow me around in the corn fields.

There was a “rule” on the farm, if you’re going to eat it don’t name it. I broke that rule my first day there & named everyone! My great grandfather just cried. It was the first of many times I seen tears in his eyes. There were times I was told to go inside & stay there, later I would notice a cow, or a pig or a chicken missing & on those days Pa wouldn’t come home, he would stay out in the fields sometimes all night. It never occurred to me that the animal I had been playing with the day before was what was laid out on the dinner table.

As I got older my mother’s husband who was Native took me out to the woods & left me there with a knife & matches after a few days of teaching me what I could eat. I made it through that time & then hunting season began. I watched in horror as he shot BAMBI!! There was no victory shout, no joy, he just looked down in shame & approached her, he knelt at her side & then said a prayer for her & thanked her for her life, as he explained that his family was hungry & needed to eat. Then we both sat there & cried. We never said a word on the drive home, there was nothing to say.

Being raised in the Native way I have always accepted that animals had a soul, that they had value, that they had just as much worth as any living creature. I would die for that belief

We have so many double standards in society, I see my  friends squawking about someone abusing a cat or a dog… while they are munching on a cow that was tortured & abused beyond all human comprehension. It is the same with humans, when a mother or father takes the life of their child we want the death penalty NOW but when they go to an abortion clinic & scrape this helpless little baby out of their womb & suck it down a tube to be pulverized by sharp blades, that’s okay because it’s a “woman’s right to choose”

At what point does a human life “count”? What makes one creature more worthy of love & protection then another? Who decides these things? Did you ever notice that cows are called “Beef” – pigs are called “Pork” – baby cows are called “Veal” – lambs are called “Mutton”? Why? Does calling them something else help us not feel so bad about eating them? Oh but wait! Why is it that Ducks, Turkeys & Chickens are all called by name for food? Most people have no emotional connection to birds, & don’t believe that they are capable of love, pain, loneliness or fear… Anyone who has ever owned a bird knows better than that. I also find it interesting that there is no legislation or regulations concerning cruelty for fowl.

These ideas put me at odds with many people, I have friends who are meat eaters & vegans, I’m not here to judge either one, I have a hard enough time on my own journey without worrying about everyone else’s conscience. The “Animal Rights” groups are absolutely insane, or they are hypocrites themselves. It is ludacris to think that I could not have an animal companion if I chose to, or that we should set all the animals free. I am also steadfastly against all of this bizarre animal legislation that destroys people’s Constitutional rights but does very little to protect animals. The problem is: I don’t have the answer, I don’t know how to “fix” it.

I do know that those birds suffer beyond all belief, I do know that there is no laws to protect them, that every moment of every day of their lives they suffer, & I also know that if you eat the flesh of a tortured animal that it can’t be good for your soul. I also know that with the amount of antibiotics & hormones that are pumped into these creatures that there is no way they can be good for your body. Look at the amount of girls & boys entering puberty at 8 to 11yrs old, all of the antibiotic resistant bacteria out there (MRSA) & all of the cancer that is running rampant.

Most importantly I want people to think: Think about the life this creature had before it ended up on your table. When you give thanks DO NOT forget to thank this animal for it misery, suffering & sacrifice. I want you to think about what it went through before it got to your grocery cart.

As I said I am a Vegetarian, not a vegan, I still have to have my eggs & dairy products. I would advocate that you also try to eat less meat. I had to cut it down gradually & on those times when I think one bite won’t hurt – well my body teaches me a very serious lesson. I guarantee that you will feel healthier & be way more fit if you just cut out meat a couple times a week.

The reason these animals are abused is because of supply & demand. So if we cut down on the demand there won’t be such a frenzy to supply. This is a big money industry & the powers that be will do ANYTHING to protect their interests

Now as I said I still like the taste of meat, but there are so many new products that taste just like the real thing & as an added bonus, most of my readers are women, most of the fake meat is made from soy products… Soy is a LIFESAVER for women in menopause. Seriously if I go one day without soy something I am in hot-flash hell. Also a lot of my readers are Type A personalities & cutting down on meat helps reduce blood pressure.

This page has some of the yummiest recipes I have found so far. Mercy for Animals also has a ton of recipes, these are the newest Thanksgiving ideas

At the very least when you do purchase meat then try to find cruelty free organic farms to buy it from. It will also be healthier for you.

These animals that we have so little regard for, that we don’t even think about, they do feel love, pain, fear, & loneliness, they want to live, they give birth, they nurture, they think, & MOST importantly they have a soul, an essence of being. Just take a look at this little creatures mad dash for freedom, she wanted to live, to be, to exist.

I am an animals rescuer, a mother, a grandmother, a minister, & a human being who is tired of all the corruption going on in our state.
View all posts by Brandia »
« Why is the Herald SO interested in who the venerable “Edmond Thomas” is? Witch-hunt or journalism?
Drinking and driving allowed in Snohomish County but only if you’re a judge! Your vote counts!!! »

2 thoughts on “Does your food have a face?”