18,750 People Spoke: The Snohomish County Prosecutor told us all to piss up a rope.

I want you to look at this video

I want you to hear Sadie’s screams as she violently attacked by 3 other dogs, she has no way out, she can not escape the tearing of her flesh, she does not even try to fight back as she is grabbed by her throat & shaken like a rag doll. All she can do is cry & scream. She is totally utterly alone as she tries to roll over & tries to submit so that the pain will stop but that is only met with an even more vicious attack. Try to imagine her fear, her pain, her desperation.

Try to imagine being a human being & LOOKING at this video & saying with a clear conscience that this is NOT worthy of FELONY animal cruelty, or that this is not enough evidence to issue a warrant.

Until KOMO news showed up they were never going to help Sadie or any of the others. I kept asking them to check on her & they just said “She won’t let us see her” Seriously? I asked them if they were just going to let her lay there & die & they said they couldn’t do anything about it!

Now I want to tell you that 18,750 people signed a petition requesting she be charged with felony animal abuse. The Snohomish County Prosecutor decided that this did not warrant felony charges.

This is only ONE time that Sadie has been attacked like this, there have been many others 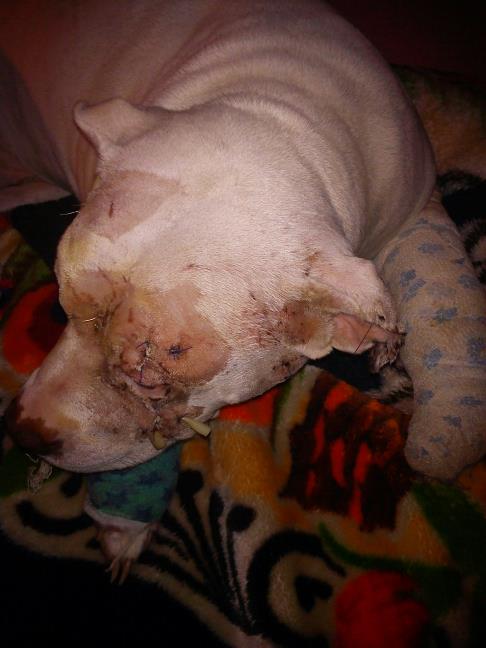 This is still not worth felony charges?????

Let me tell you how this works: Rose Adams is a snitch, I don’t mean that she knows about real crimes, I mean she makes those up & then claims to be the victim/witness who needs “protection” so she is free to break the law anyway she wants to & gets off scott free.

Animal Control Officer Dawson had MORE then enough evidence to end the suffering of these animals in August of last year, a city worker made a complaint about it, the neighbors have been complaining for her yelling dogs barking then yelping, & about the amount of animals. The two links below show all of the paperwork for the sham “investigations” they did & you don’t have to be a lawyer to know that these were plenty enough evidence.

So this video went viral, there was a public outcry but the city leaders of Edmonds do not give two shits about what the general public wants, but this is an election year so they figured they better “ACT” like they cared, so they called their buddies at the Sno~Co prosecutors office & said “Hey can you keep this on your desk for a few days til we get the media off of our backs?, they said “Sure no problem”

The truth is that no one in power there gives a shit about these dogs, no one cares if they are hurting, in pain or suffering. All they care about is power & control they sure as hell aren’t going to let US tell THEM what to do. The folks with the money down there don’t want this kind of publicity for their town or their property values. TOO LATE!!!! The old money people from Edmonds just want this to go away, but the good news is the younger generation of Edmonds have the heart & the voting power to make some changes whether the leaders of that city realize it or not.

The Officer who is the city of Edmonds spokesman was laughing & elbowing Rose Adams at her arraignment, they looked like the best of buddies, & then he ducked her out the back door like Captain save a hoe. Who sits around & laughs & jokes with a person like this? Why were they protecting her: The answers are obvious

I have been told that you catch more flies with honey then you do vinegar, but I KNOW from experience in dealing with this corrupt county that the ONLY way to get them to do the right thing is to shame them & tell the world what kind of crap they are up to. They can do it their way, I’ll do it my way. NO ONE did anything until the video went viral. Sadie might be dead by now & Brownie would still be suffering along with the rest of the dogs if we tried to be nice about it.

Everything I said was going to happen, has happened. Someone will be held accountable this time though. You can only BS so many people for so long before someone figures it out. The squeaky wheel gets the grease, only this time I am not the only one there are many others out there now that know what is going on.

There is one bright spot here though: At Rose’s arraignment she was whining about the judge said that only the dogs over 5 dogs could be taken on the warrant. I was thinking she can get the dogs back that way but I was reading over some other cases & I’m sure the prosecutor is too, she did go to law school & was hired by a leading law firm. Yes: her 5 dogs were not necessarily listed on the warrant, BUT there are two other things I didn’t think about.

1) They took Rose to jail & there was no responsible person to care for them, so what if George was there, he was seen in the video kicking dogs, & they were still working on charging him so that would’ve made them have to do two seizures.

2) They HAD to take Sadie for emergent medical care which they DON’T need a warrant for.

If they are smart about it then all they have to do is make her pay the vet costs for all of the dogs right up front before they accept her bond.

I am an animals rescuer, a mother, a grandmother, a minister, & a human being who is tired of all the corruption going on in our state.
View all posts by Brandia »
« Family rights.
Judge Ronald B. Leighton dishonors his office as Federal Court Judge »

2 thoughts on “18,750 People Spoke: The Snohomish County Prosecutor told us all to piss up a rope.”