You're Reading...
In other news, Our case, Rose Adams harassment Journal

Sorry folks but this woman lies so much that it may take more then 1 or 2 posts to cover it all.

We will start with the documents from the Edmonds animal cruelty investigations that plainly show that most of the dogs that Rose Adams had came from Christine James facilitating the whole thing.

She lies repeatedly in the first investigations, & in the second one she tries to cover her ass but still can’t seem to QUIT LYING.

It is so complicated that I am going to do it in sections. We’ll start with the Edmonds PD & AC investigations into Rose Adams, there were two of them where Christine James was directly involved. The first one Christine was lying to cover for Rose & herself, the second one she was lying to cover her own lies

This first page covers a dog named Layla who escaped from Rose Adams yard, no doubt one of the lucky ones, she was picked up by animal control dirty, muddy & stinky, her  microchip led back to a California rescue who immediately made arrangements to get the dog to safety

Here in the 1st paragraph Rose is saying she is a foster for CJ.

The second paragraph it states that Christine can only have 10 adult dogs & up to 15 puppies, but she plainly says on facebook that she has 20 of them, none are listed on her adoptapet account as puppies

The 3rd paragraph is where Christine admits she is giving dogs to Rose Adams because she is her friend. She states she is giving Rose these dogs for extra money so she is helping her fraud the social security & welfare system. She also claims to have never been over to Rose Adams house which is another lie. This is also where the AC Officer called her out on her lies & “she stumbled for words”

Here are 2 letters she sent to AC lying to them saying that Rose was dogsitting or fostering for her on the first letter, the next is where she is “authorizing Rose Adams to pick up Layla

Christine is a treasure trove of fairy tails as you will see in the next investigation but first I want you to take a look at something that might give you a bit of a giggle. She has no idea what the dogs she has had listed on her petfinder account were? Keep in mind she said this before she knew we have documents proving she gave most of these dogs to Rose & that she had them listed for Rose so she thought her little lies would be believable. Please note that ALL of these listings have Rose Adams as having the dogs. 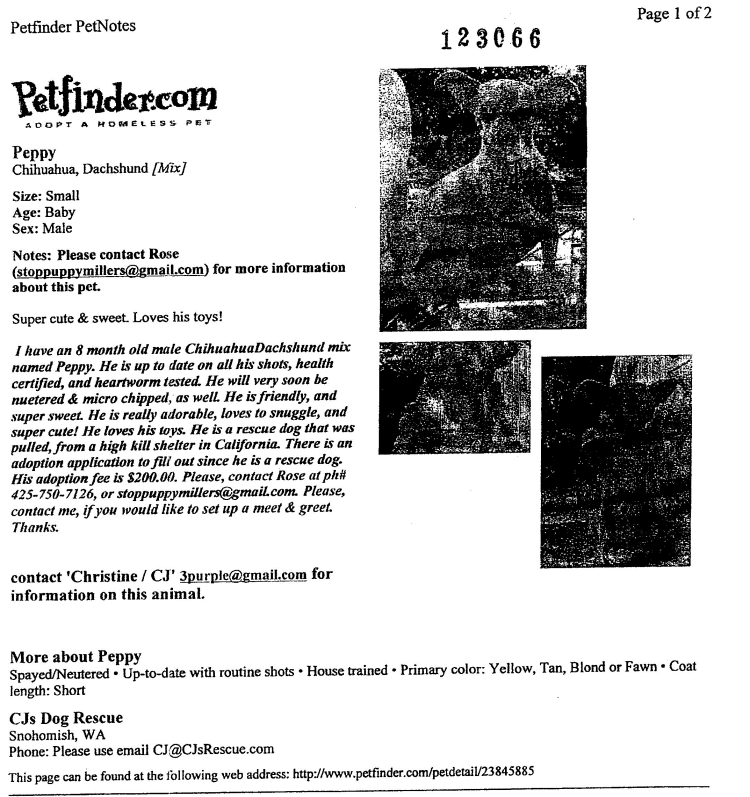 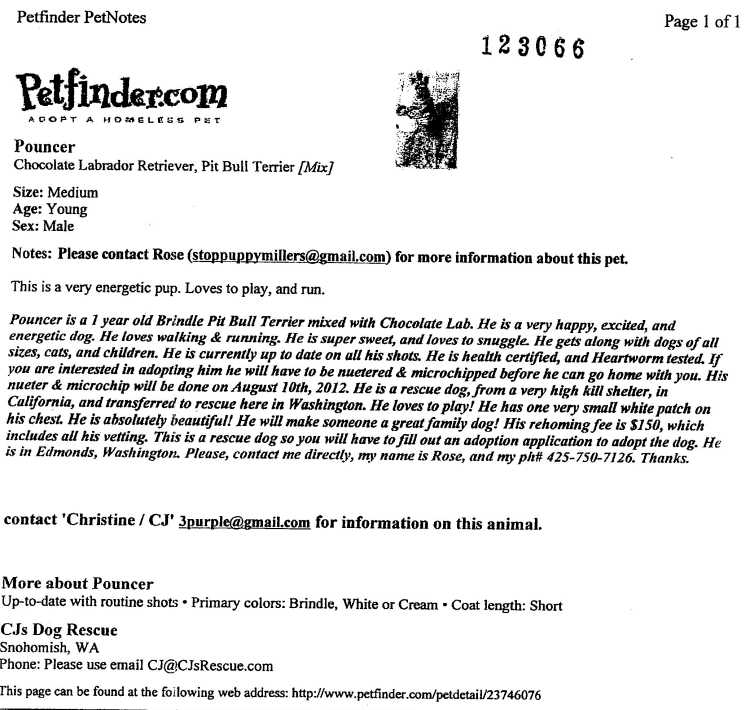 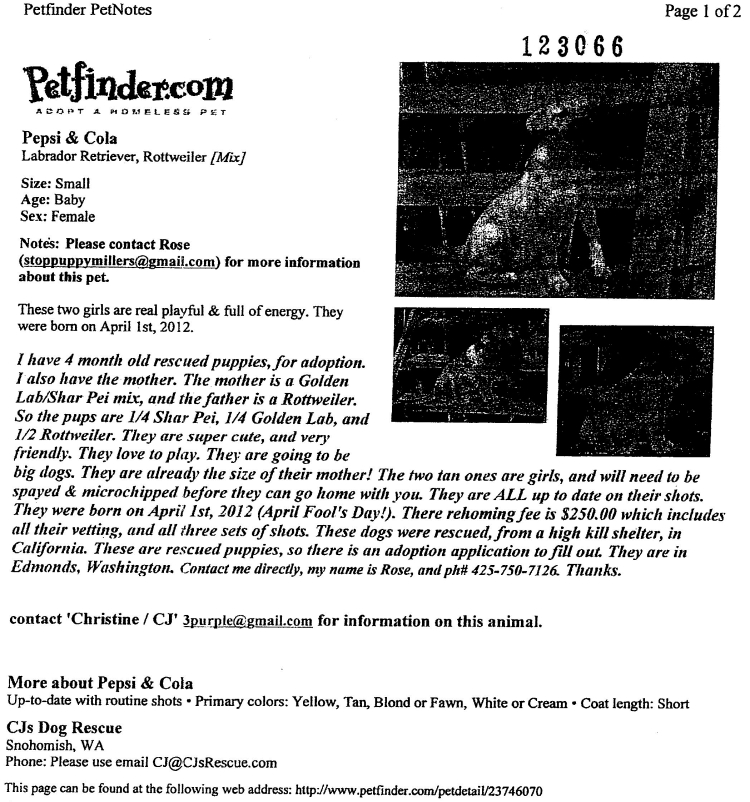 This is from the 2nd investigation that was done, seemed Christine is learning some of Rose’s tricks & has now become an “informant” 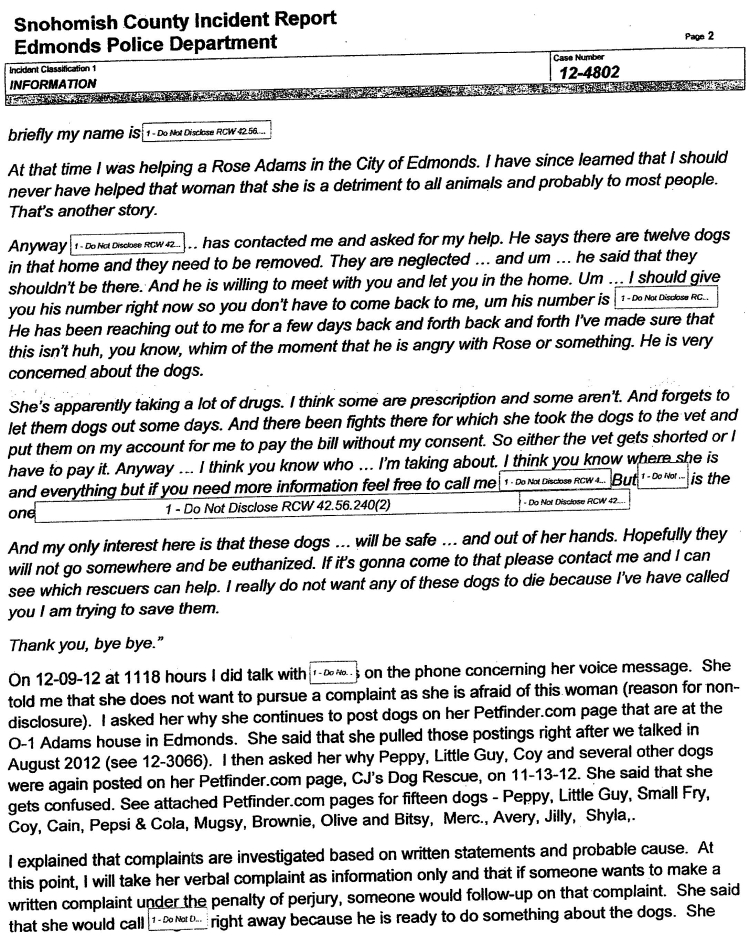 Wait a minute here Christine claims that Rose used her account without her knowledge to the Edmonds Police Dept but on Facebook she is now a martyr… 2480 dollars: Yet she never filed any charges against her for it??? Oh but if you read her facebook posting she says she had to pay for it because Rose was so poor, she paid it because she was helping her… but I thought she did that without Christine’s consent: So which is it?

The thing that is the most disturbing to me is the blase attitude about Sadie’s injuries, it also shows that she knew of numerous attacks by her phrase “this time around” So she didn’t think this last attack was all that bad????

That will do it for now, here you can plainly see that Christine was no more a “victim” of Rose Adams than I am an Oldsmobile, the has been working with her for years, & has been well aware of the putrid living conditions & abuse of these animals. She was more then willing to lie to authorities to cover Rose’s ass butt once she got in the hotseat she turned on her to cover her own ass. The problem is that yes Christine James is a liar, but she is a bad liar. Why anyone who listens to her for more then 5 minutes would believe one word that comes out of her mouth is beyond me but a few still do (((???)))

I am an animals rescuer, a mother, a grandmother, a minister, & a human being who is tired of all the corruption going on in our state.
View all posts by Brandia »
« Marti Oakley — a champion for family rights
Superior Court Judge, Jennifer Forbes … citizens beware – she’s a loose cannon! »